The committee for the bicentennial celebration of Ludvig Mathias Lindeman’s birth was appointed by the Board of the Lindeman Foundation in spring 2011. All the committee members have expertise in the musical life of Norway during the 19th century, the Lindeman family’s importance to Norwegian music, and trends in today’s musical life in Norway. 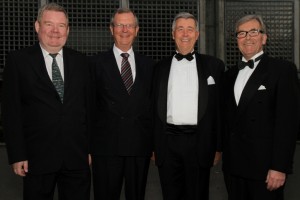 Einar Solbu (b. 1942) is chairman of the Lindeman Foundation. The foundation was established in 1969 by Trygve Lindeman, who in 1978 entrusted the position of chairman to Solbu. Solbu received his training as a church musician and has worked in music education and communication in Norway and internationally, among others as instructor at the Conservatory of Music in Oslo, associate professor and director of academic affairs at the Norwegian Academy of Music, director of the Grieg anniversary 1993, head of Concerts Norway, president of the International Society for Music Education, and vice president of the International Music Council. During the years prior to retiring from working life, he was project manager for the 200th anniversary of Henrik Wergeland and dean of the Performing Arts Faculty at Oslo National Academy of the Arts. He retired in summer of 2011. Solbu has published in the fields of music education and music communication.

Harald Herresthal (b. 1944) is an organist and professor at the Norwegian Academy of Music. Ever since being engaged by Trygve Lindeman as a part-time teacher of music history at the Conservatory of Music in Oslo in 1965, he has shared his musical knowledge at all levels as performer, writer and educator. Herresthal’s articles and books on various topics of Norwegian music history have been published in Scandinavia, Germany, France, Italy and the US. He regularly holds lectures at European colleges and universities, and is a sought-after speaker in many different contexts. In 2003 he received the Lindeman Prize for his work as educator and promoter of music.

Arne Holen (b. 1944) received his Master of Arts degree in musicology in 1969. He has been retired since 2010, but continues his professional affiliation with the National Library of Norway and the Norwegian Music Heritage project. Holen was associate professor and dean at the University of Trondheim until 1983, head of Concerts Norway until 1993, entering into a position with the Norwegian Ministry of Culture during the same year. Here he began working full-time with nationwide issues related to opera and ballet in 1996, most notably as project manager for Norway’s new opera house beginning in 1999. He was steering committee chairman for the Grieg anniversary in 1993, chairman of the Queen Sonja International Music Competition, and chairman of the Norwegian Research Council’s Centre for Child Research. Many of his publications focus on Norwegian and German church music.

Øyvind Norheim (b. 1946) received his Master of Arts degree in musicology from the University of Oslo in 1973. He has been a music teacher at Follo Folkehøgskole (Follo Community College) 1973–1979, and since 1979 has held positions as university librarian, head of department and research librarian at the Norwegian Music Collection, University of Oslo Library (The National Library of Norway since 2000). The library’s records of the Lindeman family have been a central interest since the mid-1980s, among others in close collaboration with Professor Idar Karevold, who in 1996 earned a doctorate on the subject. Norheim has published numerous articles and two books on topics related to Norwegian music history, and in 2009 received an award for best scientific publication by the German Music Publishers’ Association.